President Releases 2020 Budget Proposal (Washington Post). The President recently released his 2020 budget proposal. The budget proposal calls for the elimination of the EDA, the Manufacturing Extension Partnership program, the CDBG Program, as well as significant funding cuts for HUD, EPA, DOT, and USDA. While many of the cuts are unlikely to become reality, the budget is an important signal of the administration’s priorities and suggests a major funding fight in the months ahead. 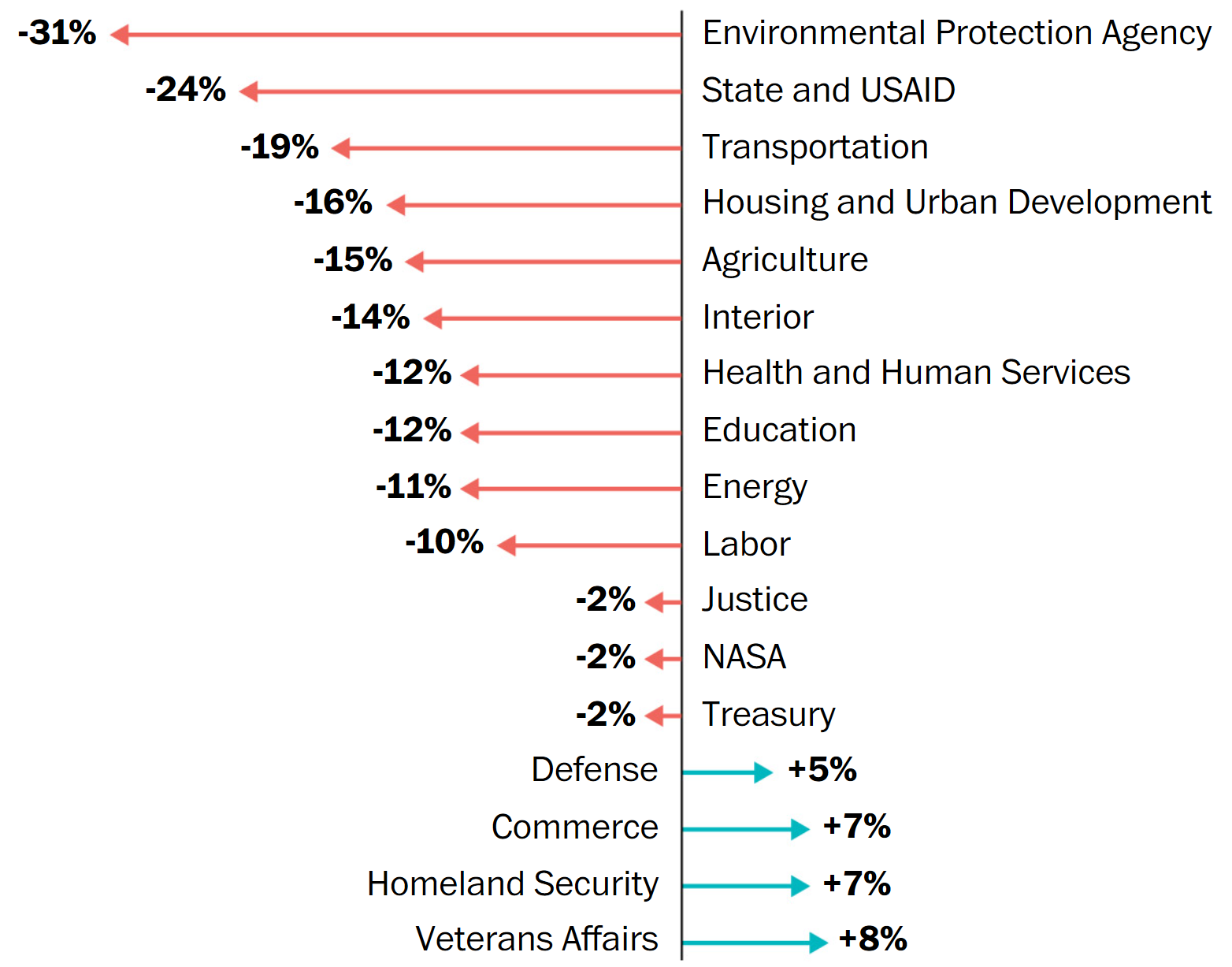 What Do Governors Care About in 2019? (MultiState Insider). Education was the most prevalent category of issues cited by governors in State of the State addresses this year. Thirty-six governors said education funding and/or reform would be a priority for their administration. School safety was another frequently addressed education issue, with 12 governors mentioning it. Other oft-cited issues were health care (20 governors), criminal justice (19 governors), workforce development (16 governors), economic development (15 governors), opioids and drug policy (14 governors), and general budget issues (14 governors). The chart shows the issues mentioned in each of eight broad policy categories, and each bar in the chart indicates the number of governors that mentioned that issue as a priority in their State of the State address. 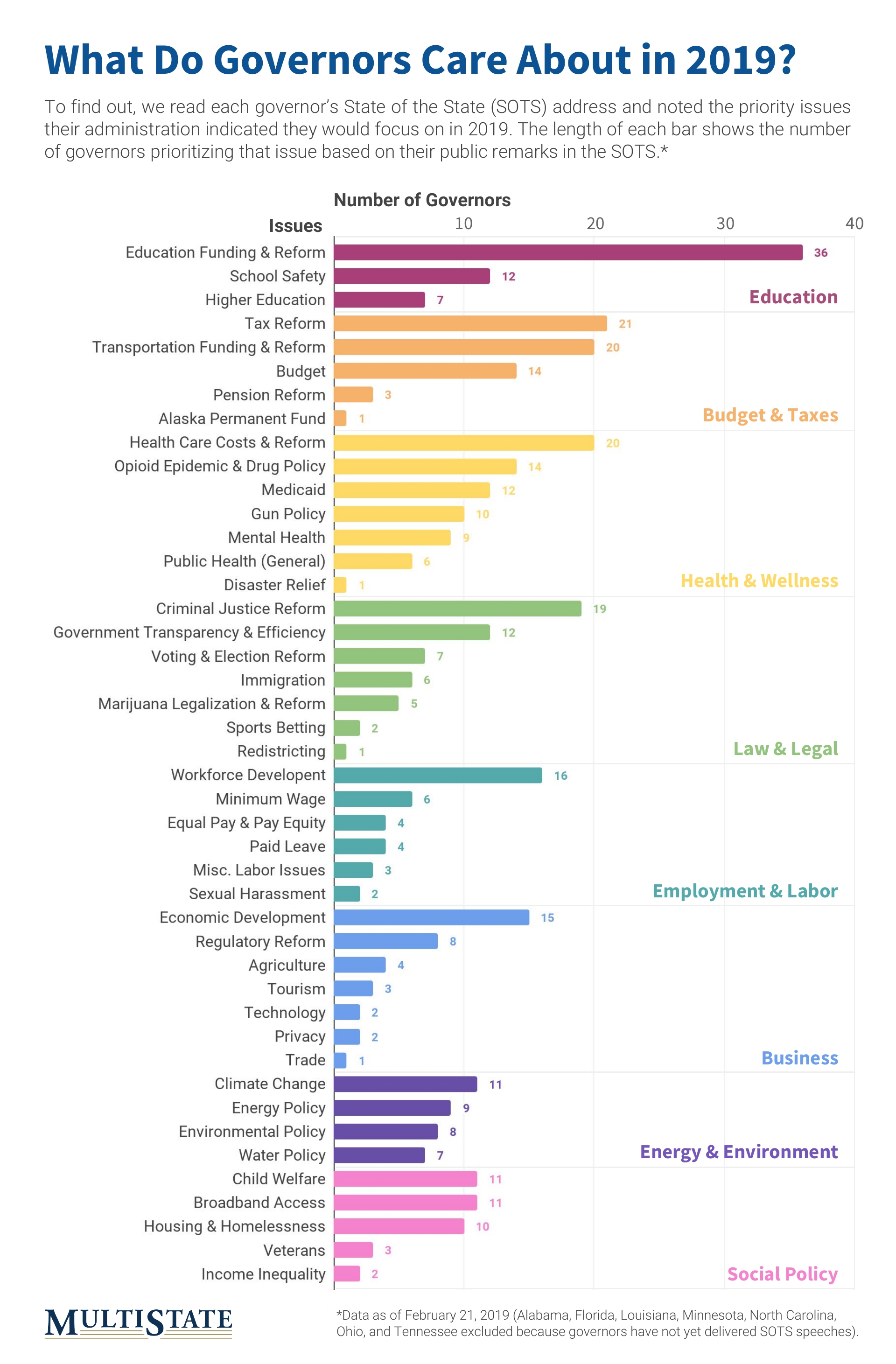 Counting Jobs in the Marijuana Industry (Route Fifty). With federal jobs figures for the state legal marijuana trade in short supply, some independent groups are taking a crack at a count. Marijuana website Leafly and consultant Whitney Economics issued a jobs report for the legal cannabis industry this week that suggests there are about 211,000 jobs now tied directly to the sector. They say that this figure is higher than the 69,000 brewery workers and 112,000 textile manufacturing employees in the U.S. And that it’s up from about 120,000 in early 2017. Pot is now legal for medical use in 34 states and for adult recreational use in 10 and in the District of Columbia. But it is still deemed to be an illegal drug under federal law.

U.S. Business Groups Encouraged by Prospect of US-China Deal (Associated Press). U.S. business groups said they are encouraged by China’s approval of a new law that loosens restrictions on foreign investment and said it could help smooth the way to a substantive trade agreement between the two countries. China’s ceremonial legislature passed a measure Thursday seeking to prevent Chinese officials from forcing U.S. and other foreign companies to turn over proprietary technology, a key sticking point in the trade fight between the two countries. U.S. companies have long complained that Chinese officials informally push them to turn over trade secrets in order to access China’s market. In some cases U.S. businesses are required to form a joint venture with a Chinese partner, and share technology with them. In other cases U.S. companies are forced to provide trade secrets to win regulatory approval from local officials, who then turn over those secrets to Chinese firms.

How Philanthropy Can Catalyze Private Investment in Opportunity Zones (Philanthropy News Digest). Opportunity Zones represent the first time federal tax policy has sought to tap unrealized capital gains to advance economic and community development. Proponents believe the incentive will help transform low-wealth communities, while skeptics have doubts that funds will flow to the people and places most in need — and, even if they do, that the ensuing transformation will have a positive impact on longtime residents and small businesses. Against this backdrop, philanthropy should step up and help shape the Opportunity Zone landscape so that benefits of the legislation also accrue to longtime residents and businesses. This blog includes six ways philanthropy can help. 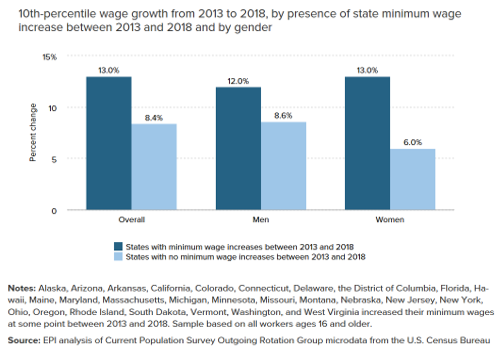 Bill Gates Says These Tech Innovations Will Change the World (MIT Technology Review). Bill Gates has made his fortune, and has given much of it away, thinking about the endeavors that will make the world a healthier, connected and equitable place. Recently, the MIT Technology Review asked the Gates Foundation and Microsoft co-founder to share the inventions and technologies that he believes will effect real change this year and beyond. Some of the advances he offered up include projects such as Dactyl, which teaches robots how to develop fine motor skills like flipping a block in its hand, and work being done to develop machines that could pull carbon dioxide from the air to lessen the effects of climate change. Given his interest in improving conditions around the world, many of the innovations on Gates’s list focus on wellness.

Addressing the Infrastructure Funding Shortfall of America’s Airports (Airports Council International). America’s airports are a fundamental component of our nation’s transportation infrastructure. Over 1.7 billion passengers and 31.7 million metric tons of cargo traveled through U.S. airports. To meet the capacity demands of the future with safe, efficient, and modern facilities that passengers and cargo shippers expect, airports need to make new investments to maintain and modernize our nation’s airport infrastructure. The ACI estimate of airports’ infrastructure needs for 2019 through 2023, adjusted for inflation, is $128.1 billion or $25.6 billion annualized. About 65.9 percent of the development is intended to accommodate growth in passenger and cargo activity, and 27.8 percent is intended to rehabilitate existing infrastructure, maintain a state of good repair, and keep airports up to standards for the aircraft that use them.

What to Do About the Rural Housing Crisis? (Entreworks). Issues of housing affordability and availability are reaching a crisis point in many communities across the US. Places like Seattle and the Bay Area get a lot of attention for their high housing costs, but housing problems are emerging everywhere today. And, the pressures in rural America are especially intense. Housing markets are affected by three factors: demand, supply, and affordability. Rural America is challenged on all three fronts.

State Tax Incentive Evaluations Database (NCSL). State tax incentives continue to be on state legislative agendas and more and more lawmakers have expressed interest in having good information on the impact of incentives. As a result, states across the country are starting to gather data and use evidence to systematically evaluate tax incentives. To illustrate what sort of evaluations states are conducting, the National Conference of State Legislatures (NCSL), with support of The Pew Charitable Trusts, created a database of state tax incentive evaluations. Evaluations published since the start of 2008 are included and more reports will be added over time. This tool allows users to search for state evaluations by analysis topic, type of incentive, state, and year. 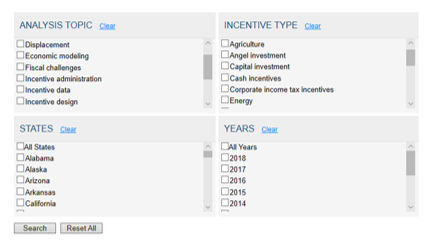 A Better Way to Attract Amazon’s Jobs (New York Times). In New York, the governor and mayor structured an agreement with Amazon using policy tools already established in the law. Amazon received “as-of-right” incentives, which are given automatically when a company wants to expand or relocate its facilities. New York’s as-of-right incentives, which are available to any company in a priority industry for the state that goes to a borough outside Manhattan, have been widely criticized as flawed and outdated. The Amazon deal in Virginia shows that a different approach is possible.

Rural Prosperity Through the Arts & Creative Sector (NGA). While there are many inspiring success stories to celebrate in rural areas, some regions also are contending with stark economic challenges, outmigration, education gaps and infrastructure needs. By leveraging the creative industries, states can deploy proven strategies that help all rural communities to thrive. This guide for Governors and states offers creative policy solutions that draw on home-grown arts and cultural assets to address the urgent problems facing rural America. The action guide is part of a collaborative project between the National Governors Association (NGA), the National Endowment for the Arts and National Assembly of State Arts Agencies.

Manufacturers Association of Maine Launches Strategy to Grow Workforce (Mainebiz). The Manufacturer’s Association of Maine launched two new programs this month to assist the state’s manufacturers to fill jobs. The first program – Manufacturing Career Connection – seeks to build the talent and workforce pipeline by focusing on students, educators, veterans and immigrants. The second program is a nationwide program (SEMI High Tech U) that connects high school students and educators to an intensive three-day, hands-on program for those interested in STEM careers and led by industry volunteers.

Private Sector Partnerships in Work-Based Learning: Lessons Learned from States (NGA). The National Governors Association Center for Best Practices has been very engaged in recent years helping states take to scale work-based learning initiatives for youth and young adults in STEM-intensive industries, including apprenticeships. NGA’s work includes administering a three-year-long Policy Academy on Scaling Work-Based Learning with 18 states and territories; and providing support to grantees of the U.S. Department of Labor’s American Apprenticeship Initiative. Listen to the recording from the SEDE network’s recent webinar on this topic describing leading state efforts. Among the valuable lessons learned are the need to emphasize business engagement and partnership development in expanding access to work-based learning opportunities and improving state talent pipelines as a critical component of a successful economic development strategy.