Top 9 Economic Predictions for the Next 10 Years (The Balance). This article discusses the top nine predictions that most affect the U.S. and your own personal economy over the next decade. Among the predictions – the U.S. economy will boom, then bust. More specifically, the Federal Reserve predicts that economic growth, as measured by gross domestic product, will rise to 2.4 percent in 2019. That’s within the ideal range of 2 to 3 percent. But a 4 percent growth rate could set off a dangerous boom-and-bust cycle. If growth does hit that level, it could create a recession by 2020. 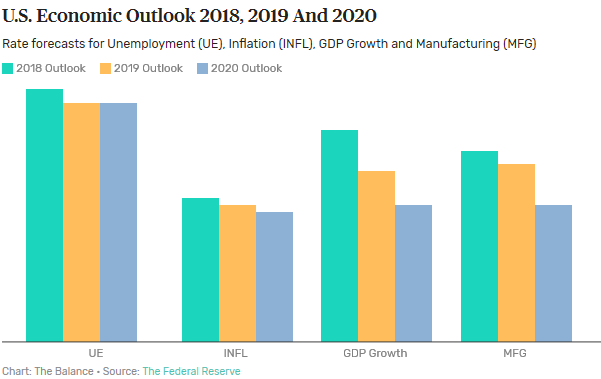 White House warns of ‘domestic extinction’ of defense suppliers (Defense News). The outlook for lower-tier suppliers in the nation’s defense industrial base is troubling, with DOD facing “limited capabilities, insecurity of supply, lack of R&D, program delays and an inability to surge in times of crisis,” according to the Trump administration’s interagency study of the defense base. In response, the report calls for extending direct investment by the federal government in the industrial base’s lower tiers through DOD’s Defense Production Act Title III, manufacturing technology, and industrial base analysis and sustainment programs. That type of intervention would address “critical bottlenecks, support fragile suppliers and mitigate single points-of-failure.”

U.S. bicycle industry feels effects from tariffs (Daily Gazette – Capital Region NY). The U.S. tariffs enacted on thousands of Chinese-made items will eventually trickle down to the same two places: American businesses and their customers. One such place where the rubber hits the road is an independent bicycle shop on Freemans Bridge Road. Bicycle companies are boosting the wholesale price of bikes to cover the 10 percent tariff enacted the Trump administration in late September, and may boost prices again after Jan. 1, when the punitive import duty rises to 25 percent.

Resources for Doing Business in the United Kingdom (US Trade Office). Approximately 7,500 U.S. firms have a presence in the United Kingdom, and more than 40,000 U.S. companies already sell their goods and services in the UK. Resources for U.S. small businesses looking to export to the UK are available to help. For example, the UK and US governments have published new IP and trade toolkits for SMEs for SMEs to help protect intellectual property rights in their markets.

Early Adopters Move Ahead with Opportunity Funds (CDFA Weekly Review) The Opportunity Zones (OZ) incentive has been part of the federal tax code for less than a year, but early participants are setting the groundwork to facilitate and make Qualified Opportunity Fund investments in distressed communities.

Measuring Inclusion (Urban Institute). Being more inclusive can make states and cities stronger and more stable and can give all residents a chance to improve their quality of life. To better understand what constitutes “inclusive”, the Urban Institute collected data on 274 of the largest U.S. cities and ranked those cities on economic, racial, and overall inclusion across four decades. Also available is a dashboard to explore national trends, learn lessons from case-study cities, and dig deeper into your own areas.

Why Cultivating Your Innovation Ecosystem Is Worth the Work (Stanford Review). Despite the recognition of their importance for economic development, the concept of local innovation ecosystems remains fuzzy. This can make it challenging for practitioners working on ecosystem-strengthening initiatives—particularly outside of existing innovation hubs—to articulate the value of their work and to engage the collaborators whose participation they need. This article presents strategies to help ecosystem-builders.

The State of U.S. Infrastructure (Council on Foreign Relations). Debate has intensified over how to improve the nation’s infrastructure, as analysts say U.S. transportation, water, and other systems face major shortfalls. Much of the discrepancy between the United States and its peers can be traced to very different funding levels. On average, European countries spend the equivalent of 5 percent of GDP on building and maintaining their infrastructure, while the United States spends 2.4 percent.

State Business Incentives Database (Bloomberg). The 2018 legislative season has proven to be a somewhat quiet year for state tax credits. Aside from big company incentives (e.g., Amazon and Foxconn), state legislatures simply do not have the resources to introduce new tax credit programs. Despite the lull, September did see the enactment of four new tax credits: one each in Maine and Massachusetts, and two in the District of Columbia.

JobsOhio signs a collaboration agreement to accelerate growth of midmarket companies (Business Wire). ELITE, London Stock Exchange Group’s (LSEG) international business support and capital raising program, signed an agreement with JobsOhio, the privately funded non-profit corporation that promotes job creation and economic development for the State of Ohio, to provide midmarket companies in Ohio with access to ELITE’s unique training program to support their growth. This collaboration signifies the first entrance of the ELITE platform into the U.S. market.

Scaling Reform: Inside Tennessee’s Statewide Teacher Transformation (FutureEd). The federal Every Student Succeeds Act has placed authority for improving education squarely in states’ hands. This report chronicles how one state has made valuable changes to its teaching profession, with powerful lessons for other states. Over the past decade, Tennessee has led one of the most comprehensive educator reform efforts in the country, under both Republican and Democratic administrations.

South Carolina launches THINKER program to close skills gap (SSTI). The Economic expansion and baby boomer retirements will likely create a need to fill 3.4 million manufacturing jobs between 2015 and 2025, but only 1.4 million positions are likely to be filled, according to a study by Deloitte and the Manufacturing Institute. However, South Carolina’s new THINKER (Technology-Human Integrated Knowledge Education & Research) program, created by Clemson University and funded by the National Science Foundation, hopes to close the skills gap that hinders the remaining 2 million jobs. THINKER is described as the first program in the nation that brings together graduate students and technical college students in advanced manufacturing. The program seeks to equip students with both technical skills and soft skills (such as communication and collaboration), in order to create well-prepared leaders in advanced manufacturing, and assist in better understanding the interaction of machines, people and data.

The story above is from MEP State News published monthly by the State Science and Technology Institute (SSTI). SSTI provides information and services for those involved in technology-based economic development. For more information visit here.