Opportunity Atlas Provides Resource for Place-Based Interventions (US Census and Opportunity Insights). The new Opportunity Atlas released by Opportunity Insights, with assistance from the U.S. Census Bureau, finds that the economic mobility of Americans is tied to the neighborhoods in which they live. The data reveals that opportunities for upward mobility are not necessarily better for children growing up in cities rather than in rural areas. All research results are provided in a publicly available online data visualization tool, the Opportunity Atlas, where users can view the data for every census tract in America, overlay their own data points of interest, and export into a data set for their own analysis. 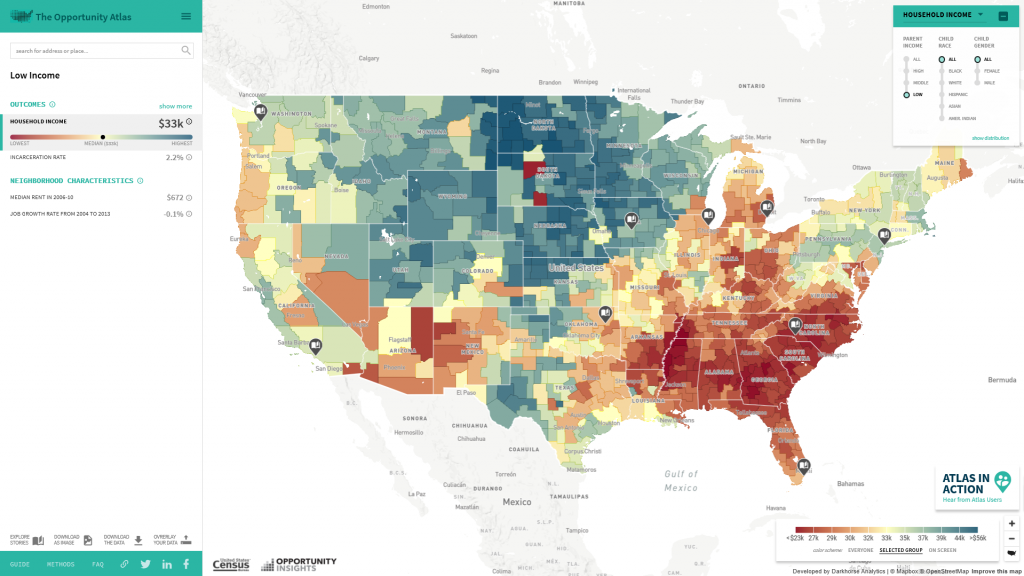 Drywall Manufacturing Impacted by Coal-Fired Power Plant Closures (Pittsburgh Post-Gazette). The decline of coal-fired energy in the U.S. has strained the symbiotic relationship between drywall manufacturers and coal plants, which produce calcium sulphate (gypsum rock) as a byproduct of the burning process. The wallboard industry began locating plants right next to coal plants that were outfitted with the sulfur dioxide-removal technology in the 1990s and subsequently signed long-term contracts with their neighbors for a steady “coal ash” supply. Now, upwards of 45 percent of U.S. wallboard supply may be impacted as the industry seeks to adapt.

Walmart Sounds Trade War Alarm (Business Insider). Walmart, the largest retailer in the United States and a major buyer of U.S. manufactured goods, sent a letter to the Trump administration asking it to reconsider new tariffs on $200 billion worth of Chinese goods. In a letter to the US Trade Representative, the retailer indicated that the immediate impact of the new tariffs “will be to raise prices on consumers and tax American business and manufacturers.”

Treasury Releases Proposed Regulations on Opportunity Zones (US Treasury) The Treasury Department issued proposed guidance related to the new Opportunity Zone tax incentive. The tax benefit, created by the 2017 Tax Cuts and Jobs Act, is designed to spur economic development and job creation by encouraging long-term investments in economically distressed communities nationwide. The proposed regulations clarify what gains qualify for deferral, which taxpayers and investments are eligible, the parameters for Opportunity Funds, and other guidance. For more information, our partners at CDFA have extensive resources available, click here.

VCs Hit Snag in Proposed OZ Regulations (Bloomberg). The recently proposed Opportunity Zones guidelines require that businesses generate at least half their gross income within a zone. According to various investors and venture capitalists, the 50 percent requirement will hurt high-growth startups. For example, that threshold may be fine for an apartment building or a grocery store, but difficult to meet for a business hoping to manufacture a product to be sold widely or provide services online.

Integrating Housing and Economic Development Strategies (Smart Incentives). Housing is becoming a greater priority for economic development organizations because they are highly focused on talent. Economic development leaders care about the factors that affect where individuals working in high-demand occupations at all skill levels want to — and are able to — live as well as where they work. Worrying about jobs without also worrying about how people will get to those jobs and the residences they are coming from is inadequate. The challenge is to identify ways that communities can get housing, transportation, and economic development strategies to work together.

The Future of Autonomous Vehicles (National Governors Association). Many commentators have noted the potential consequences of autonomous transportation, particularly how it will lead to job losses for taxi and truck drivers. However, there are critical second and third order effects that will have additional impacts on society. A world without traffic violations and parking meters means massive disruptions to insurance, real estate, and public safety. Far too little attention has been paid to these upcoming changes. Preparing for this new reality will require close cooperation and collaboration between state, local, and federal leaders.

The State of Broadband 2018 (Broadband Commission for Sustainable Development). Broadband is vital infrastructure, as essential as water and electricity networks. The data analysis and recommendations contained in this year’s State of the Broadband report come at a crucial time when Internet access is more important than ever before. To boost broadband, the report recommends: building leadership for broadband; promoting Internet training; stimulating consumer and business demand; monitoring Information and Communications Technology (ICT) developments to inform policy; reviewing universal service measures; strengthening digital skills and literacy; supporting local e-Businesses and entrepreneurs; adapting legal frameworks; and reducing taxes and duties on telecom products and services.

Amazon Plans to Split HQ2 between Long Island City, NY and Arlington, VA (New York Times). After conducting a yearlong search for a second home, Amazon has switched gears and is now finalizing plans to have a total of 50,000 employees in two locations. The company is nearing a deal to move to the Long Island City neighborhood of Queens and the Crystal City area of Arlington, Va., a Washington DC suburb. Amazon already has more employees in those two areas than anywhere else outside of Seattle, its home base, and the Bay Area.

The Cities that Lost Out on Amazon’s HQ2 Still Won (CNN Business). Seventeen cities in North America didn’t land prizes in the Amazon sweepstakes, but they laid the groundwork to become tech hubs for years to come. Additionally, some of the nation’s most valuable real estate and commercial assets have been put on hold because cities were taking a wait-and-see approach with Amazon. In a post-HQ2 environment, you’re going to see a new wave of expansions and re-locations over the next 18 months.

The State of Innovation: Building a Stronger & Fairer Economy in New Jersey (SSTI). Governor Phil Murphy presented his economic development strategic plan – The State of Innovation: Building a Stronger & Fairer Economy in New Jersey – that seeks to set the state on a path to a stronger future, where innovation and diversity are at the forefront of its economy, while re-establishing New Jersey as the state of innovation. The plan seeks to advance five key goals by 2025, including to: (1) foster a better, more supportive business climate to add 300,000 jobs; (2) achieve 4 percent wage growth or $1,500 median wage increase; (3) double venture capital in New Jersey, while attracting $625 million in new venture capital and bring 40,000 more women and minorities into STEM-related fields; (4) close the racial and gender wage and employment gaps by increasing wages between $15,000 to $23,000 for those groups and adding 42,000 new women and minorities to the workforce; and (5) encourage a thriving and inclusive New Jersey by reducing city poverty rates and investing in its urban centers and downtowns.

The story above is from MEP State News published monthly by the State Science and Technology Institute (SSTI).  SSTI provides information and services for those involved in technology-based economic development.  For more information visit www.ssti.org.