Treasury Releases Second Tranche of Proposed Regulations for Opportunity Zones (CDFA) The Department of the Treasury just released its second round of proposed regulations on Opportunity Zones. These rules are designed to make compliance easier for opportunity fund investors.

The Geography of Prosperity Measured (Brookings). The Hamilton Project (THP) is an economic policy initiative at the Brookings Institution. THP conducted an exploration of the geography of prosperity and found economic vitality varies widely between counties and not only across regions. For this study, THP constructed a Vitality Index to measure a place’s economic and social wellbeing. The index combines a county’s median household income, poverty rate, unemployment rate, prime-age employment rate, life expectancy, and housing vacancy rate. It turns out economic vitality is quite stable over time. For instance, places that were highly innovative in 1975 (as measured by patent activity) are still more vital today. In contrast, counties with a high share of employment in manufacturing in 1980 and counties with a high concentration of employment in one industry tended to fare worse over time. THP also provides an interactive web tool that allows users to explore the vitality index and its components at the county level and state averages. 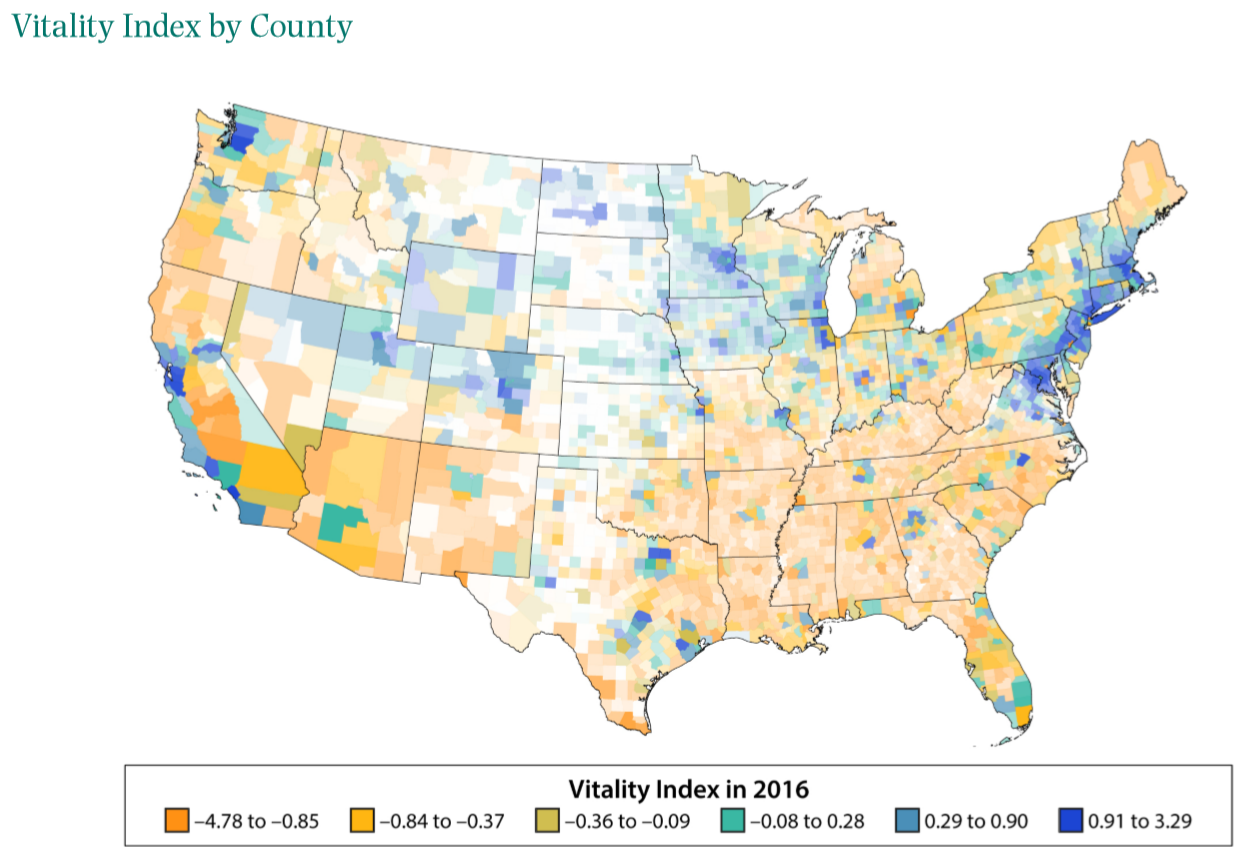 Revitalizing American Leadership in Advanced Manufacturing (Manufacturing USA). Manufacturing USA is a network of institutes that bring together multiple federal agencies, large and small manufacturers, universities, community colleges, and nonprofits to catalyze new technologies, meet research needs and train the workforce of the future. This initiative bore out from the question: How can we foster a competitive U.S. innovation agenda and ensure that research and technology advances happen in and benefit our communities? Manufacturing USA now supports the co-investment of 14 Institutes supporting various research concentrations from digital manufacturing to flexible electronics to remanufacturing to battery lifespan. On March 26, 2019, the House Committee on Science, Space, and Technology’s Subcommittees on Research & Technology and Energy held a hearing on Revitalizing American Leadership in Advanced Manufacturing. The panel consisted of representatives from the federal agencies, institutes, and members that are part of the Manufacturing USA network. For an overview of Manufacturing USA, click here.

United States-Mexico-Canada Agreement State Fact Sheets (United States Trade Representative). The United States, Mexico, and Canada have reached an agreement that supports North American manufacturing and mutually beneficial trade. The new United States-Mexico-Canada Agreement (USMCA) is intended to create more balanced, reciprocal trade that supports high-paying jobs for Americans and grows the North American economies. The Office of the United States Trade Representative (USTR) within the Executive Office of the President negotiates directly with foreign governments to create trade agreements, to resolve disputes, and to participate in global trade policy organizations. USTR has developed USMCA State Fact Sheets which summarize for each state overall and key industry exports to Canada and Mexico, along with how provisions under USMCA will potentially impact states.

State, Local Governments Work to Steer Opportunity Zones Investment (Journal of Tax Credits). The involvement of state and local leaders in pursuing OZ investment in their communities is smart, in both attracting and directing investment. The incentive is a work in progress, but the benefits of bringing billions of dollars of investment to low-income communities can be a game-changer. One crucial way for states to encourage use of the OZ incentive is to conform state tax law to the federal Internal Revenue Code–offering a deferral and reduction in state tax on capital gains that are invested in qualified opportunity funds (QOFs).  Most states have done so–41 states either conformed to the federal OZ provisions or lacked a tax on capital gains, making the point moot. Beyond tax conformity, several states are considering additional financial incentives to encourage and direct OZ investments within their states.

Opportunity Zones Knocking, But Few Answering the Call So Far (Bloomberg). Treasury Secretary Mnuchin predicted the tax incentive for Opportunity Zones could take in $100 billion of investments a year. CoStar Realty Information Inc., a real estate data firm, says it’s tracking more than 258 funds. But OpportunityDB, a database for Opportunity Zones, saw only 88 funds seeking to raise a total $26.4 billion as of April 1. Timing is crucial. Investors get a reduction in postponed taxes – 10 percent if they hold on to their new investments for five years, and an additional 5 percent for another two years. But to capture that extra 5 percent before the postponed tax bill comes due at the end of 2026, investors must get in by Dec. 31 this year. For more information on Opportunity Zones, our partners at CDFA have extensive resources available, click here.

Issues to Track in the Second Tranche of OZ Guidance (Opportunity Zones Resource Center). Months ago, the Treasury department issued its first tranche of guidance concerning the opportunity zones (OZ) tax incentive, releasing 74 pages of regulations, a revenue ruling, an updated Q&A document and a draft of Internal Revenue Service Form 8996. In the next few weeks, the second tranche will be released. The article provides a summary of 20 OZ guidance areas that will go a long way in determining the success of the OZ incentive in facilitating the investment of equity capital in real estate and operating businesses in distressed communities. The list is segregated into six broad categories: Compliance testing/calculations; Operating businesses; Real estate; Renewable energy; Corporations; and Fund management.

How Stagnating Cities Can Prepare for the Future (Manhattan Institute). America’s most disadvantaged cities, too often left and behind and forgotten, were undone by powerful forces like deindustrialization and the rise of the global knowledge economy that undermined their economic raison d’être. Difficult as it may be to accept, until market forces swing back in their favor, no major economic recovery is likely for most of them. This doesn’t mean adopting a rhetoric of hopelessness. Rather, it means instead of speculative projects or subsidies, their best strategy is to create the preconditions of revival by fixing their finances, reforming their governance, and rebuilding the core public services on which their residents depend.

Innovation Isn’t Only for High-Tech Businesses (Innovation Policyworks). Many small businesses are concerned about increases to the minimum wage, arguing that they couldn’t raise their prices. For small businesses that sell products based on price alone, it’s probably true that raising prices isn’t possible. But why don’t these businesses try to offer new products or services that aren’t commodities? Why don’t they try innovation as a strategy? It may be that many small businesses think innovation is only something that high-tech companies can do. But there are examples that prove them wrong. One example is Sea Bags, based on the waterfront in Portland, ME, which makes tote bags. You’d think that tote bags are all the same. But Sea Bags decided to make theirs out of old sails. So, not only are they a sustainable business, using recycled materials, but their bags are very different – each one is unique, depending on the sail it was made from. By being unique, Sea Bags has earned their price point. Sea Bags has grown to have 19 retail outlets and sells online as well as to corporate clients. More small businesses should strive to provide customers with something that is “meaningfully unique.”

Benefits and Costs of Tax Incentives – Scenario Builder (Pew Charitable Trusts). States use economic development incentives to encourage companies to locate or expand. An incentive has benefits for residents when the economic gains it generates, less its costs and any negative effects, are positive. Pew has created an incentive scenario builder to see an interactive illustration of how each economic and policy factor can influence the costs and benefits of incentives. Specifically, Pew recommends as policymakers and development officials evaluate their incentives, they should keep Costs, Targets, Program Design, and Economic Conditions in mind. 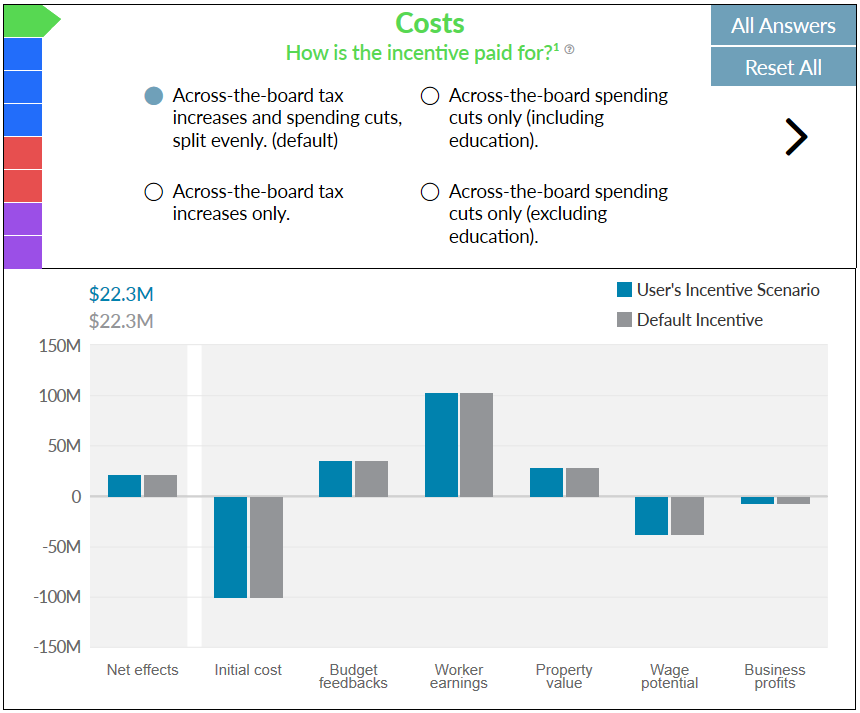 Huge Incentives Helped Georgia Land $1.7 Billion Battery Plant (WSB-TV Atlanta). Georgia’s biggest jobs deal in a decade came with one of the state’s biggest-ever incentive packages. The state and Jackson County combined offered SK Innovation about $300 million in grants, tax breaks and free land to convince the company to build an electric car battery plant along I-85 in Commerce. Georgia’s offer includes sales tax exemptions for equipment and energy as well as research and development tax credits that could generate millions more in benefits to SK Innovation for years to come. In an interview, the company’s CEO said Georgia’s offer was similar to packages from other Sun Belt states, but there were other factors that weighed on the decision, including workforce availability, the state’s business climate and perhaps most importantly, Georgia’s Quick Start customized training program. The incentive deal is the largest in Georgia since the $1.2 billion Kia Motors factory opened in West Point in 2009.

Impact Investing: Good for The Planet, Good for Profit? (NPR). Foundations and pension funds are under pressure to do more “impact investing,” focusing not just on the bottom line, but also on doing good for people and the planet. But is it effective? If so, why isn’t impact investing catching on more?  This 47-minute discussion on NPR’s On Point covers the topic and its potential to promote positive economic growth and profitable returns to investors. Guests include Marc Gunther, Fortune Magazine writer and author of the four-part series “Good Returns” on impact investing in the Chronicle of Philanthropy; Deval Patrick, managing director of Bain Capital Double Impact and former governor of Massachusetts; and Andy Posner, founder and chief executive officer of the nonprofit Capital Good Fund, which offers small personal loans and financial services to help end endemic poverty.

The 10 Jobs Disappearing the Fastest (Governing). The largest occupation losses tend to be low-wage positions that have been disrupted by automation, although there are other factors at play as well. It’s likely that many local economies where these jobs are heavily concentrated could soon incur downsizing if they haven’t already. The Jacksonville, Fla., and Salt Lake City metro areas, for example, employ disproportionately large numbers of workers in disappearing fields. The following 10 occupations had the highest percentage job losses over the last decade: Telemarketers; File Clerks; Postal Service Mail Sorters, Processors and Machine Operators; Bill and Account Collectors; Data Entry Keyers; Order Clerks; Chief Executives; Production Worker Helpers; Installation, Maintenance and Repair Worker Helpers; and Telecommunications Line Installers and Repairers.

Cybersecurity Training at Historically Black Colleges and Universities (Diverse Education). The rise of cyber-enabled economic espionage has created a great demand for new cyber-related jobs. It is estimated there will be a 1.8 million workforce shortage in this field by 2022. In response, several Historically Black Colleges and Universities (HBCUs) are increasing engagement with industry, government and education partnerships to train more cybersecurity analysts. For example, Morgan State has created the Center for Reverse Engineering and Assured Microelectronics (CREAM), a Department of Defense-funded program that addresses the increasing dependence on cybersecurity for warfare. Norfolk State now offers malware reverse engineering training that allows students to work with and study malware. The school has also submitted a proposal for a cyber psychology program. As a result of these programs, the Department of Homeland Security and the National Security Agency have credentialed both Norfolk State and Morgan State as Centers of Academic Excellence in cyber defense education.